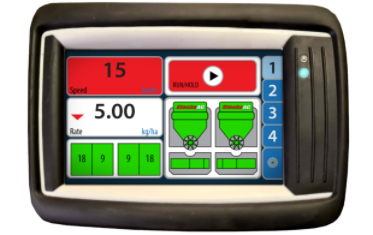 The new unit allows precise control over the Fan Jet Duo, a pair of contra-rotating Fan Jet Plus applicators.  The two applicators, running in tandem, are typically used to broadcast slug pellets, up to a maximum of 36m.

The sophisticated TM controller is supplied with a 4.3” colour touchscreen and has a simple and intuitive layout; displaying the application rate and forward speed as well as cutting edge features such as section control and headland control.  It is also capable of applying variable rates in conjunction with an uploaded precision farming map, clearly shown in real time on the control screen.

Disc speed control enables the operator to reduce the disc speed and therefore the spread width by pressing the icon on the home screen. This can be done for both applicators either individually or together.  A consistent application rate is ensured as the TM Controller automatically reduces the rate to match the disc speed with the use of its own GPS sensor. 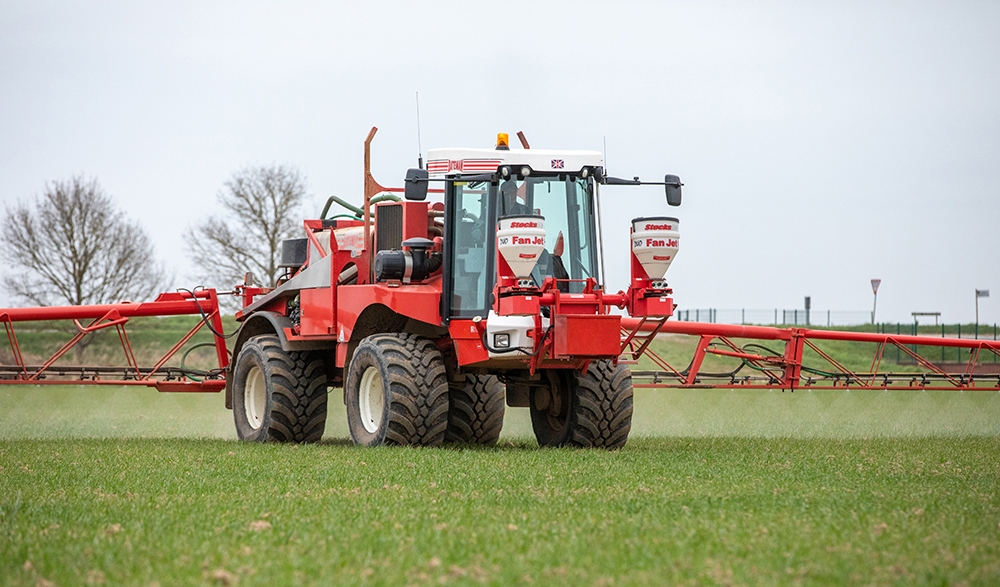 Headland control enables the operator to define the field boundary with the first pass around the field using the integrated mapping facility. If the spread width crosses an area/section that has already had product applied then the application rate will automatically switch off.

The TM software allows the operator to create and store product application information, including the calibration settings for each new product.  The job creation and export feature make it possible to record the application history of each field task.

An optional 24 volt power inverter is available for the larger self-propelled sprayers running on 24 volt electrics.

The Fan Jet Duo is commonly mounted to self-propelled sprayers or tractor front linkages. It can also be rear mounted although it is not recommended on sprayer booms due to its weight. UTV vehicles can also be used as long as the high current requirement is met. Both electrical power and height above crop of spinning disc are limiting factors in spread width. The Duo can be fitted with either twin 65 or 130 litre hoppers, the contra rotating spinning discs are capable of spread widths up to 36 meters (product dependent).

The TM controller will be on display for the first time on the Stocks stand no. 742 at Cereals Event 2021.

BUILT IN THE UK

Wisbech is still the home of Stocks Ag. All applicators are fabricated, assembled and painted in the Cambridgeshire factory. Precision assembly and quality control are paramount to the production process.

The R & D team work with both the factory and farmers to deliver a seeding solution that is fit for current farming practices.

We use cookies to ensure that we give you the best experience on our website. If you continue to use this site we will assume that you are happy with it.
Find out more here.